Oestrus Manipulation In Fillies And Mares

Many vets recommend the use of altrenogest products for oestrus manipulation in fillies and mares who have behavioural problems that are thought to be linked to the reproductive cycle. This treatment is particularly relevant and useful in racing and competition mares who might otherwise be referred to as “stroppy mares”. Please be mindful of local rules of competition regarding with-holding times.

Mare hormones and the oestrus cycle

For some mares coming into season or oestrus results in an undeniable change in behaviour that prevents them from performing at their best.
This behaviour could be as subtle as a slightly raised tail, to the extreme with frequent urination, squatting, gait abnormalities and unpredictable ‘nasty’ behaviour such as kicking and biting.

Oestrous: (estrous) this is the entire length of the reproductive cycle

Oestrus: (estrus) this is the time when the mare shows signs of being in “heat” and is receptive to the stallion. It lasts for approximately 5 days. This is when the mare may show stroppy behavioural changes.

Dioestrus: (diestrus) is the period when the mare is not receptive to the stallion.

Anoestrus: (anestrus) is the period when there is no reproductive hormonal activity at all.

Mares only cycle when day length is long, in other words, they are seasonally polyoestrous. This is an attempt to ensure that foals will be born in warmer months and not when the weather is bad.

This control of the mare’s hormones is all guided by the pineal gland in relation to day length and affects not just one hormone but a few. Take a look at this diagram to see how the hormones affect each part of the mare’s reproductive system and give feedback to each other to regulate the whole cycle. 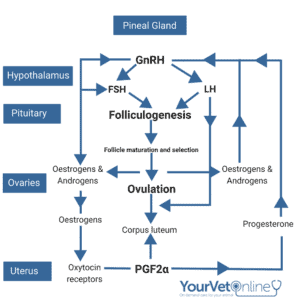 Hormones that are active during the oestrous cycle of a mare.

When a mare is in oestrus her oestrogen levels are high and progesterone is low. This results in the behavioural signs we see related to stallion receptivity.

Oestrogen levels dip slightly at ovulation and once a corpus luteum is formed, progesterone rises. Progesterone is responsible for the maintenance of pregnancy and is highest in dioestrus.

Occasionally a mare may show inconsistent signs of oestrus or prolonged oestrus. There are a number of potential reasons for this including ovarian tumours, uterine infection, equine Cushing’s disease, and poor nutrition.

Uterine infections are by far the most common cause of abnormal cycling in mares that have been bred or foaled previously. It is uncommon to find infections in young, maiden mares.

Uterine infections are diagnosed by ultrasound examination and collecting swabs for bacterial culture and cytology.

Depending on the amount and type of hormone a tumour produces you might see either:

Vets diagnose granulosa cell tumours via ultrasound and blood tests to check hormone levels. Removal of the ovary is required and this is usually performed standing.

How To Manipulate The Oestrous Cycle To Prevent Heat?

If a mare is showing poor behaviour during oestrus then it is possible to manipulate her cycle so that she stays out of heat or oestrus.

The most common and easiest way to do this is by administering progesterone to mimic the high levels of pregnancy. Altrenogest is the product used (a synthetic progestin) and this comes either in an oral or injectable form. Care must be taken and gloves need to be worn when handling this drug, particularly by females.

Once progesterone is stopped, the mare will start cycling 5 to 7 days later.

Oxytocin is also able to be administered by injection between day 8-14 post ovulation. This will result in preventing signs of oestrus for between 60-120 days. The difficulty with this method is you need to know the date of ovulation and you need to give repeated injections for about 7 days.

In the past, some veterinarians used marbles to mimic an embryo in the uterus and therefore prolonging the secretion of progesterone from the corpus luteum. A marble is placed in the uterus 24 hours post ovulation. Results in trials were poor with this method with work performed by Nie et al where only 39% of treated horses showed prolonged luteal function (progesterone production).

In practice, results have been just as poor with complications occurring such as infection (pyometra), marble breakage and marbles getting stuck in uteri folds. Marbles are not recommended.

What Should You Do?

The take-home message for mares with behavioural issues related to their cycle is to, first of all, ensure that their reproductive health is normal via an ultrasound exam plus or minus blood testing as required.

Following this, the two main choices for treatment are altrenogest (Regumate) oral or injectable or oxytocin.

ALERT: Altrenogest Use In Competition Horses

Australian horse racing and FEI competitors:
There has been the detection of trace levels of the anabolic steroid trendione and/or trenbolone in certain batches of veterinary prescription animal remedies containing the progestin altrenogest.

Trainers and riders are advised that they should not administer injectable products containing altrenogest and should avoid using oral altrenogest products within one clear day of racing or competing.

LR44A – When a blood or urine sample taken at any time from a filly or mare has detected in it trenbolone, trendione or epitrenbolone below a mass concentration of 1 microgram per litre, together with altrenogest, it is open to Racing NSW (or the Stewards exercising powers delegated to them) to find that the provisions of AR.175(h)(ii), AR.177, AR177A, AR177B, AR.178 and/or AR.178H do not apply if, on the basis of the evidence available to them, they are satisfied that the detected level of trenbolone, trendione or epitrenbolone in the sample was caused by contamination of the active ingredient altrenogest administered in accordance with the Rules of Racing and advice published by Racing NSW.
Trainers are advised that they should continue not to use injectable products containing altrenogest and not use oral altrenogest products within one clear day of racing until further notice.

At this stage, we do not know whether other racing jurisdictions will follow. We will update this page when we know.

How Your Vet Online can help you and your animals

Dive straight into the feedback!Login below and you can start commenting using your own user instantly