Causes Of Laminitis In Horses

We’ve all heard the saying “no hoof no horse” and when laminitis in horses is concerned, sadly it can result in death.

Laminitis is essentially a clinical sign that indicates that an animal (horse, donkey, mule, sheep, cattle, goat, camel etc) has inflammation of the structures (laminae) that bind the hard horn of the hoof to the pedal bone.

It is an extremely painful condition that if not treated appropriately and in a timely fashion, can result in rotation of the pedal bone and sinking of the boney column through the hoof sole.

When this occurs, the animal is not able to be saved and must be euthanased on humane grounds.

Thankfully, the vast majority of cases of laminitis can be prevented with management skills that are not difficult to implement.

This article will describe the main causes of laminitis in horses so that you as an owner or carer of horses can be extra vigilant and prevent this devastating condition. What Is Laminitis In Horses

Before we get into what causes laminitis in horses let’s quickly cover what is laminitis.

Laminitis means inflammation of the sensitive structures (laminae) between the hoof wall and the pedal bone.

Laminitis involves the failure of the bond between the hoof wall and the distal phalanx, commonly called the coffin bone, pedal bone, or third phalanx (P3).

Even though it is referred to as inflammation, not all the conditions that cause laminitis are inflammatory in nature.

The bond between the hoof wall and coffin bone is the only thing that stops the horse’s body from effectively falling through its feet. Therefore any compromise to this structure has devastating consequences. Causes Of Laminitis In Horses

When thinking of how laminitis occurs it is important to think of it more as a clinical sign, rather than a disease in its own right.

It is essential to determine the cause of laminitis so that we can provide the correct long-term treatment strategies.

Essentially, there are three main causes of laminitis: overload, metabolic and inflammatory.

A crude measure of laminitis is when P3 rotates so that the distance from the hoof wall at X is smaller than at Y. In a normal horse X = Y.

Horses and ponies are heavy creatures. Anytime they have an injury and must bear weight unevenly there is a huge risk of laminitis due to overload in that weight-bearing limb.

You may have heard of Barbaro, the American racehorse who broke his leg trying to win the famous Triple Crown in America.  Overload laminitis is what he ultimately succumbed to, not the severe pastern fracture that he originally sustained.

Overload laminitis occurs when there is unrelenting weight bearing on one leg for a prolonged period.

There are two main types of metabolic causes of laminitis.

One is Cushing’s Disease (pituitary pars intermedia dysfunction – PPID) and the other is Equine Metabolic Syndrome.

Both of these diseases affect the way the body controls carbohydrate metabolism resulting in high circulating levels of insulin.

PPID is mainly a disease of older horses.

As horses and ponies age,  neurones in the hypothalamus degenerate and produce less dopamine.

Dopamine acts on the pars intermedia, which is responsible for controlling the secretion of hormones including ACTH and cortisol.

If there isn’t enough dopamine produced then these hormones don’t receive any negative feedback and more cortisol and ACTH is secreted than normal.

The higher than normal amount of cortisol affects many body functions.

As well as laminitis, some of the clinical signs associated with PPID include: 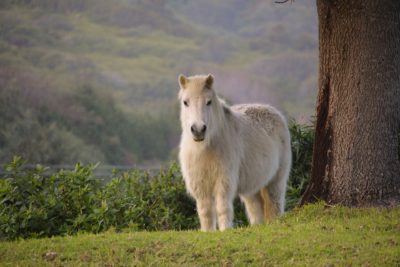 Pony with classical signs of PPID – hirsutism and fat deposits

Equine Metabolic Syndrome is basically a collection of clinical signs such as:

It has not been determined exactly what causes EMS, although horses that are obese >6/9 body condition score are more prone and there appears to be some genetic predisposition.

It is thought that EMS can predispose horses to PPID.  Therefore if you have an EMS horse or pony, you will need to be on the alert for Cushings as your horse ages.

Horses and ponies with EMS are very sensitive to soluble carbohydrate feeds such as lush pasture or high-carb hays and supplements.  This can lead to bouts of laminitis.

We need to, therefore, be mindful of how much access EMS horses have to these feeds, particularly in spring with lush, new grass and in the autumn when night temperatures get down to freezing.

This type of laminitis is often seen in performance horses on high starch diets, or horses when they get very sick.

One type of inflammatory laminitis is grain overload otherwise known as carbohydrate overload.

In the horse, carbohydrates are supposed to be digested and absorbed in the small intestine.

If too much is fed and partially digested grains enter the hindgut, rapid fermentation occurs upsetting the microflora of the hindgut.

These hindgut bugs then die releasing toxins into the bloodstream that cause endotoxaemia.

In this situation, blood vessels dilate and the laminae are exposed to mediators that result in laminitis.

Other types of inflammation can result in laminitis:

Common to all of these inflammatory diseases is that they affect the whole body.

Toxins are absorbed into the bloodstream and then reach the lamellae of the hoof.

Why Understanding The Cause Is Important

Laminitis is a clinical sign of a more far-reaching disease process or overload problem.

To treat laminitis effectively, we need to work out what is causing the problem first.

While the emergency treatment of acute laminitis is essentially the same regardless of cause, determining the trigger for its development in the first place means that a vet can provide a detailed management program for ongoing care and prevention of future flair-ups.

We will discuss how to treat laminitis in a future article.

If you have a question about what is laminitis in horses ask us below! Have you got a horse or pony prone to laminitis? What have you worked out to be the cause or trigger?