Ehrlichiosis in Dogs: Is Your Dog At Risk Of This Tick-Borne Disease?

Ehrlichiosis in dogs was first discovered in May 2020 in the Kimberley region of Western Australia.

Sadly, we are already seeing the considerable spread of this terrible disease across Western Australia, Northern Territory, South Australia and Northern Queensland.

E.canis is a notifiable disease that can cause significant illness in our dogs.

We all must stay vigilant to the signs and use appropriate tick control.

Read on to learn how to keep your dogs safe, prevent the spread of the brown tick and recognise signs that a dog may have acquired infection. 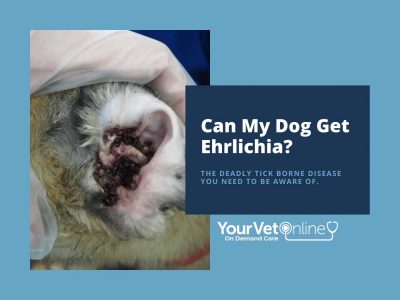 What Is Ehrlichiosis In Dogs?

Ehrlichiosis is a tick-borne disease caused by the organism Ehrlichia canis a type of rickettsial bacteria.

E.canis can be found worldwide and is most prevalent in tropical and sub-tropical regions.

You may have heard Ehrlichiosis in dogs being called names such as canine rickettsiosis, canine haemorrhagic fever, canine typhus, tracker dog disease, and tropical canine pancytopenia. These are all names for the same disease.

Until May 2020, Ehrlichiosis has only been found in dogs in Australia that have been imported (on testing when in quarantine).

Because this disease has been found in dogs that have not just entered Australia, it is of concern, as it indicates that transmission has occurred naturally via infected ticks biting dogs.

The main vector for transmission of E.canis is the brown dog tick (Rhipicephalus sanguineus). 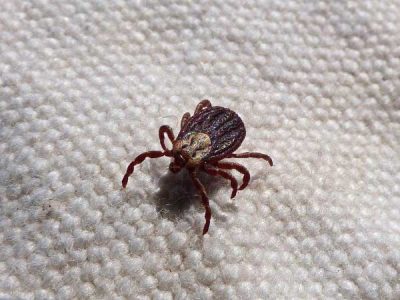 Dogs get ehrlichiosis from the brown dog tick (Rhipicephalus sanguineous).

A tick acquires the organism after feeding on an already infected dog, then transmits the infection to other dogs when biting them.

The brown dog tick is unusual among ticks, in that it can complete its entire life cycle both indoors and outdoors.

Essentially, this means that the tick can be introduced into a home on an untreated dog that originated from or visited an infested location.

Where dogs sleep and spend the majority of their time are the areas most likely to harbor the most brown dog ticks in the environment, whether indoors or outdoors.

We also need to remember that E.canis can be transmitted through blood transfusions, which is one reason why testing of blood donations is performed.

What Signs Will My Dog Show If They Become Infected?

There are three distinct phases of infection in dogs that also vary in intensity and duration:

This begins one to three weeks after being infected by a tick bite.

Signs can last from two to four weeks.

Often the Clinical signs of ehrlichiosis are non-specific and include:

Dogs that recover from the acute phase will enter the subclinical phase where they may stay for weeks to years.

There are no overt clinical disease signs during this phase.

Sometimes these dogs are able to clear the disease, remain asymptomatic or sadly, develop the chronic form of ehrlichiosis.

Not all dogs enter this phase, and for some that do, they can be severely affected and die as a consequence.

Signs that we see are similar to the acute phase such as:

We may also see more signs such as:

We also may see other signs when we do more diagnostic tests such as:

How Do I Stop My Dog Getting Ehrlichia?

There are a number of things that you can do to prevent canine blood parasites including:

To prevent the brown tick you must use a repellent such as:

PLUS a chew tablet.

To stop the spread of this tick-borne parasite in Australia, it is vital that you adhere to movement control advice. In Australia, infection with E. canis is a nationally notifiable disease.

Any person who suspects a case must immediately contact the Emergency Animal Disease Hotline on 1800 675 888.

Can Dogs Infect Me With Ehrlichia?

While dogs infected with Ehrlichia are not able to infect humans directly, we can become infected and suffer from ehrlichiosis if an infected tick was to bite us.

For that reason, it’s important to follow the recommendations above to keep tick numbers low.

If you are worried about tick disease in dogs, ask a question below in the comments section or get in touch with one of our vets to discuss your concerns.