Why Do Dogs Eat Garbage And How Can We Stop It?

Do you own a dog that loves to eat garbage?

Dogs eating trash is an extremely frustrating problem, one that can result in severe health consequences.

Whether your dog is scavenging garbage at home or when out on a walk, it’s important that we put measures in place so that this doesn’t occur.

If you have a dog that likes to raid the bin, read on and learn why they might be doing this, and some techniques to stop it. Why Do Dogs Scavenge?

Scientists believe that the dog’s early ancestor the wolf became domesticated to humans due to them hanging around villages and soon realising that the human’s waste was a great source of food!

These domesticated wolves were quite happy to spend time with people in these villages because they could scavenge for leftovers.

The simple answer to why dogs eat garbage is that it’s instinctive for our pets to scavenge for food scraps even though they have regular meals and aren’t dependent on the food they find lying around.

When it comes to our rubbish, our dogs don’t see it as leftovers and spoiled food that’s been thrown out, but instead, it’s just more food for them to help themselves to.

Why Is Eating Garbage Dangerous?

If your dog has a taste for garbage and regularly raids the rubbish bin, you’re likely to see your dog vomiting relatively frequently.

Unfortunately, garbage eating can be much more serious than just leaving you a mess to clean up.

Sometimes garbage contains food that has gone mouldy but that’s no deterrent to a determined pooch.

Some species of mould produce toxins that can cause trembling and liver disease in dogs.

The number of times I’ve seen dogs rushed to the vet ER with severe tremors is more than I can count on fingers and toes.

Some of the food rubbish in your bin can be quite toxic to dogs.

Leftover meat can become contaminated by bacteria such as salmonella and that can make your dog very sick.

Cooked bones are very brittle and can perforate their intestine.

If you’ve got xylitol-containing foods such as chewing gum or peanut butter they too can cause a lot of harm.

Garbage can be extremely dangerous!

How To Stop Your Dog Eating Garbage?

Keep Your Garbage Locked Away

The easiest thing to do is to keep your garbage bins and bags behind a dog-proof cupboard door! Hide it! Out of temptations way.

Ensure Your Rubbish Bin Has A Tight Lid

Seems like a no-brainer, but some dogs can even work out how to use the pedal….so be warned!

Ensure Your Dog Doesn’t Have A Health Problem

I know this sounds a little weird, but some diseases such as diabetes and Cushings can cause your dog to have a voracious appetite!

Likewise, some medications such as prednisone can mean your dog is always hungry.

If your dog suddenly seems hungry all the time and has other symptoms like drinking a lot of water, it would be wise to consult one of our vets for an in-depth consultation.

Do you own a dog that can’t be trusted around garbage? Share with us how you prevent them from getting into rubbish. 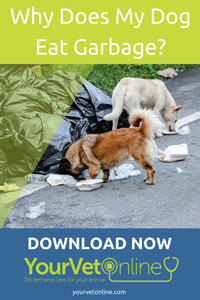