Why Crate Training Makes Bringing Home A Puppy So Much Easier

I’d heard why crate training makes bringing home a puppy so much easier, but initially it wasn’t top of mind.

We’ve all done it, you bring home a new puppy and you are so filled up with the cuteness and the toilet training and, did I mention the cuteness?

Although I’ve owned dogs before and brought home puppies before, I’d never crate trained any, so when I read about crate training puppies I kind of poo-pooed the idea.

That was until I chatted with Dr Leigh and some other friends.

At first I thought the idea was cruel.

Seriously, who would think putting my cute fluffy furball in a cage was anything but mean?

I soon learnt that nothing could be further from the truth, it has helped us to have a more secure and happy puppy, and it could do the same for you!

Now I am the one eating my words, I’m a true blue convert.
Read on to hear why I think crate training puppies is just the bee’s knees. An Owner’s Perspective To Crate Training 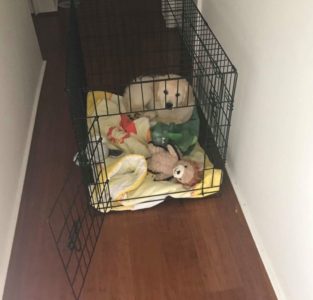 Reasons why crate training makes bringing home a puppy so much easier from a puppy owner’s perspective:

The Puppy Has A Safe Place

He can escape there when the kids are too much (there are two of them and they make an awful lot of noise). 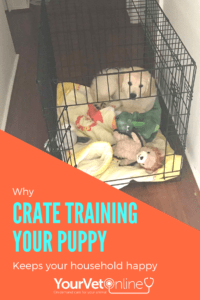 It’s his safe place and the kids know not to intrude into the crate.

Toilet Training Has Been So Much Easier

When pup is in the crate, he wants to do his best to keep it clean.

I have to help him to do so, so taking him out at night when he woofs or making sure he’s not in it too long and therefore doesn’t have an accident.

My House Is Still Intact

I haven’t come home from school pickup to the house being eaten or anything like that.

Before going out, we go outside to the toilet and then the pup happily hops into his crate so I can go to pick up, drop off for after-school activities etc.

Having a safe place to sleep, pup is going through the night with an early get up for the loo around 6am.

He’s happy in the crate and hasn’t really suffered any separation issues.

The first night home, the crate was in our bedroom, then the hallway, and has now moved further to the loungeroom.

Goal: to have him in the laundry with his fur sister, Lizzie.

He Goes In The Crate In The Car

For our other dog, we restrain with a short lead in the car, but transporting pup in the crate is so much easier.

He’s happy to go in and there are no struggles.

Honestly, using a crate for our pup has been a lifesaver for my frantic lifestyle.

And here’s Dr Leigh to explain from a vet’s perspective how to crate train your dog for a successful outcome.

Tell us your stories of crate training your puppy in the comments below.