Sometimes as a vet, you never know what will walk, or slither, through the doors of your vet clinic.

For Dr Karen Davies of Direct Vet Services in Point Cook, Victoria, today was one of those days when a Tiger Snake was brought to her clinic.

While Dr Karen predominantly treats cats and dogs, she often gets called upon to help other local critters such as farm animals and wildlife.

Snakes are becoming frequent patients at the clinic with the clinic treating many snakes, even those venomous ones. 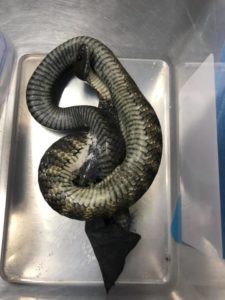 Tiger Snakes are one of the top 10 venomous snakes in the world and the 3rd most venomous in Australia behind the Eastern and Western Brown Snakes.

These snakes are often found in watery habitats such as creeks, dams, drains, lagoons, wetlands and swamps. They can be found along the Eastern Seaboard, Southern and West Australia.

They eat a wide variety of meat including frogs, toads, lizards, small mammals and birds.

The venom of this snake is highly toxic causing neurotoxic and coagulation issues. While these snakes are quite shy, they will defend and often will dry bite before inflicting their venom. If bitten urgent medical attention is required.

Stewy the Snake Catcher from Melbourne

It is usually Stewy the Snake Catcher that is called to help catch a snake in the Melbourne area and this was no different.

Today the call came to collect an Australian Tiger Snake from a building site in the Point Cook area of outer west Melbourne.

It wasn’t your normal snake-catching tale though.

It seems luck wasn’t exactly with this sub-adult female’s side with her being caught up in some very sticky builder’s tape found on a construction site.

Dr Karen tells how “The poor girl was firmly stuck and it is likely she had been this way for at least three nights until she was found by the tradies.

Some scales showed signs of discolouration and drying indicating she was suffering from mild dehydration.”

Her tail and vent were firmly adhered to her body meaning she couldn’t move or toilet appropriately. Only about 2 inches of her neck and head were free to move.

This made catching the girl a lot easier, but of course, the tape needed to be removed.

Dr Karen Davies from Direct Vet Services in Point Cook Victoria with one of her Bulldogs that she breeds.

When Stewy the Snake Catcher turns up everyone is always on high alert. Most snakes that he brings in are venomous and require extreme care. This was no exception.

To keep herself safe from snake fangs Dr Karen carefully placed a clear plastic 20cc syringe over the snake’s head.

The easiest way to handle a snake is to put it inside a perspex or clear pipe. In this case, a syringe was used. Once a snake is in a pipe, as long as they can’t turn around, they can’t back out either so you are quite safe.

Dr Karen used a product called Zoff to soften the adhesive holding the tape to the body and then carefully removed the tape using one hand to secure the head, the other to pull the tape off.

Only a few scales suffered any damage and this was minimal.

A bath in soapy water removed some of the stickiness and the snake was then returned to her container with a small amount of water in the bottom to aid rehydration.

After spending the afternoon at the clinic to ensure there were no further issues, Stewy collected her and whisked her off to a new marshland home, well away from people and construction sites.

Some Fun Facts About Snakes

You can read more about snakes and what to do if your cat or dog is bitten by a snake in this article.