Is It Safe To Feed My Cat Tuna?

It certainly seems that for many of our feline friends, the smell and taste of tinned tuna fish is considered a delicacy.

They hear the sound of the can of tuna being opened, and seem to come from nowhere!

But how safe is it to feed canned tuna to cats?

Whether it’s food fit for human consumption such as a can of tuna in brine, tuna in water or freshly caught raw tuna from the ocean, many cats are delighted to see fish in their dinner bowl.

However, there is the risk that some cats will become addicted to tuna and just won’t eat anything else.

And if this is the case, we could be putting your cat’s health at risk.

And there are many conflicting opinions so read on to find out why you might want to reconsider feeding your cat a diet of tuna. 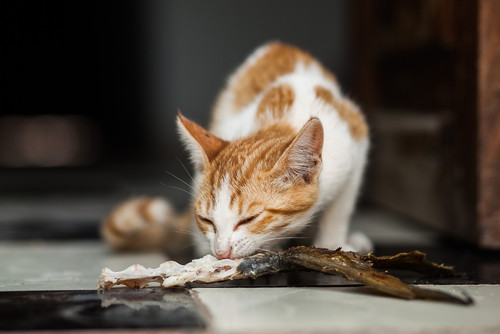 Fresh tuna or human-grade canned tuna are both not suitable as a major part of your cat’s diet.

While tuna isn’t on the toxic foods list for cats, it certainly cannot be recommended if you wish to feed your feline friend a balanced diet.

This is because neither fresh nor canned tuna is nutritionally balanced and complete for cats and over time, deficiencies can develop.

There are also potential issues with nutrient excesses.

A nutritionally balanced and complete diet is one that has the appropriate protein, carbohydrate, fats, vitamins and minerals in the amount for that stage of life.

Tuna Is An Unbalanced Meal For Cats

If you really want to feed your cat tuna, then the following guidelines are recommended to ensure your kitten or cat has a balanced diet:

What If My Cat Is Addicted to Tuna?

It’s not uncommon to hear of cats developing a tuna addiction, therefore it’s important not to start something you may later regret.

While it is important for kittens to be fed a variety of textures and meat proteins so that they don’t develop aversions, it’s vital that you feed a balanced diet to ensure optimal growth.

If your feline insists on a fish-only meal, you can try to gradually wean them onto other protein sources or use fish flavoured commercial cat food in wet or dry. Our tips:

It is wise to only feed your cat tuna in vegetable oil if it is an infrequent treat.

Vegetable oil offers low nutritional value and is high in calories, so for many cats, it is of no benefit whatsoever.

Does your cat love tuna so much it won’t eat anything else? This isn’t good for their health. Contact our online vets to discuss their nutritional needs. 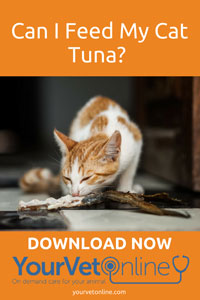